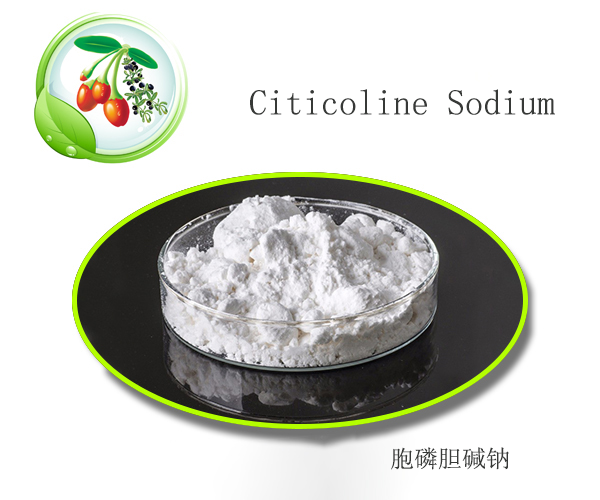 Citicoline sodium CAS NO:33818-15-4 EINECS No.: 251-689-1 Product Discription: Citicoline Sodium, also known as cytidine diphosphate-choline (CDP-Choline) & cytidine 5′-diphosphocholine is a psychostimulant/nootropic. It is an intermediate in the generation…

Citicoline Sodium, also known as cytidine diphosphate-choline (CDP-Choline) & cytidine 5′-diphosphocholine is a psychostimulant/nootropic. It is an intermediate in the generation of phosphatidylcholine from choline. Studies suggest that CDP-choline supplements increase dopamine receptor densities, and suggest that CDP choline supplementation helps prevent memory impairment resulting from poor environmental conditions.Preliminary research has found that citicoline supplements help improve focus and mental energy and may possibly be useful in the treatment of attention deficit disorder. (research use only)

1.Citicoline Sodium has gradually restore limb function in  the Acute craniocerebral trauma and the disturbance of consciousness after the surgery

2.Citicoline Sodium can also be used for other central nervous system function and the disturbance of consciousness caused by acute injury,

1.  Citicoline Sodium is a brain chemical that occurs naturally in the body.

2.  As a medicine, Citicoline Sodium is taken by mouth as a supplement or given by IV or as a shot.

3. Citicoline Sodium is used for Alzheimer’s disease and other types of dementia, head trauma,cerebrovascular disease such as stroke, age-related memory loss, Parkinson’s disease, and glaucoma.